Where In The World Is Dr. Jill Stein? 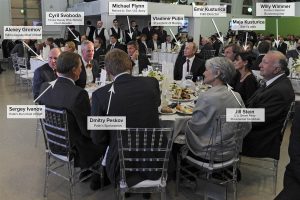 Dr. Stein was quite the chatterbox during the election, wasn’t she? She was even kind enough to force a recount(using donations for the eternally hopeful Hillary fans).  And then like a meteor in the cold Siberian night, she vanished!  Wonder what she’s been up to these crazy days.  I remember how she self-righteously scolded and warned Hillary voters of what a tragic thing it would be if the most qualified person, in the history of presidents, running were to ever be elected. I remember how she proudly said how she was the better candidate and if not her, the Trump! Her arrogance knew no bounds!

Our dear doctor, who had been running for president since 2012, thought she could the job better than Mrs. Clinton. Oh, how she regaled herself in front of far less than massive crowds with her ominous cries of faux concerns for the country. She seemed a sympathetic figure at time and dainty, yet cunning at others. And let us not forget her trusty sidekicks Silly Sarandon and pseudo-intellectual Cornell West. Her sugary schtick was good, but I never bought into it; not even for a moment! Anyone so dishonest as to make a false equivalency between Trump and Hillary couldn’t get any more of my time or thoughts.

But after all this talk about #TrumpRussia, I got to thinking. During the campaign, she and Gen. Michael Flynn dined with Putin at Russia Today’s 10th-anniversary gala.  She and Flynn were paid guests of honor. He must be the greatest dinner host of all time(GOAT) OR like Flynn, dear Dr. Stein was paid to be a pundit all too eager to run down the US to Russians(Ed Schultz has run over there to do same). Got paid handsomely; if Flynn is any indicator.  I bet my two front teeth that if US Intel follows the money like  Flynn, they just may find that she was right out of Putin’s pocket.  Placed smack dab in the middle of the most consequential election of my lifetime. Her disruption was to result in one thing and one thing only: get Trump elected!

When this whole sordid thing is fleshed out, I won’t be surprised that Putin’s other useful idiot was Dr. Jill Stein.